This month we shine the Spotlight ON! Chuck Hughes.

When Chuck was approached about being featured on Spotlight ON!, the first thing that came to his mind was Arthur Conley's "Sweet Soul Music."

"Spotlight on Lou Rawls y'all…"

Except in this case, it's Chuck Hughes who's in the Spotlight, y'all.

Chuck has made several in-person appearances at the Maui Steel Guitar Festival and contributed a video to the recent livestreamed Open Stage Showcase. Chuck also performed at the 2017 HSGA Hawaiian Steel Festival in Fort Collins, Colorado.

Chuck plays a National Tricone in the style of Sol Ho'opi'i. While his repertoire includes many old-time Hawaiian songs that were played by artists such as Sol Ho'opi'i and Connie's Hawaiians, One memorable performance, however, was his interpretation of Nirvana's "Smells Like Teen Spirit" on the steel guitar at the Maui Steel Guitar Festival. 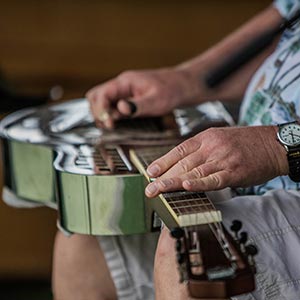 What is the explanation for this dichotomy of musical interests – Hawaiian to Rock?

For those of you familiar with the rock genre, the Hellcats perform music akin to the music of the Stray Cats. The Hillbilly Hellcats is Chuck's group which he started with Lance Bakenmeyer back in 1993. Their touring has taken them to 16 countries and 40 States including Alaska and Hawaii. Since 2001, their music has appeared over 4200 times in TV and movies. They have released numerous CDs, a string of singles, and are now promoting most of their music via streaming. 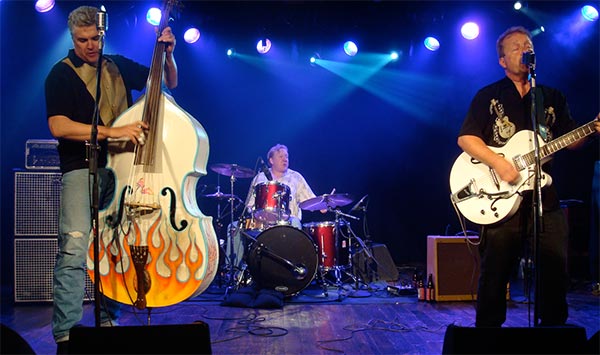 Chuck has been a professional musician all his life. As the profit centers changed, he adapted to the flow, including stints as a music store guitar teacher, instrument salesman, top 40 6-nighter live local musician, casuals band, touring original music act, sync licensor, and streaming.

Chuck says, "I started sync licensing in 2001, and hopped on streaming early. Currently, the Hellcats are almost at 5 million streams on Spotify."

Chuck grew up in St Louis, Missouri, San Rafael, California, and Baltimore, Maryland. He recently located to Flagler Beach, Florida after residing in Colorado for many years.

Chuck first noticed and became interested in music at a young age. His mother would play a Top 40 station on her Bakelite radio as she did house chores. His father would take him to the neighborhood tavern a few blocks away where he would stand on the bar and sing the songs he heard.

Chuck describes how he became interested in the Hawaiian steel guitar.

"In 1969 in my freshman year at University of Maryland a guy in the dorm gave me a copy of Stars of the Steel Guitar vinyl record on Starday, and there were cuts by Jerry Byrd and Buddy Emmons on there on Hawaiian Steel, as well as cuts on pedal steel. In 1979 my brother moved to Kahului to pursue surfing, and invited me out in 1989. We went to several islands, and explored Waikīkī. I met Barney Isaacs at House Without A key, saw Alan Akaka, Casey Olson, and some other players."

He continues, "I'll never forget when we went to a hotel outdoor patio where a Hawaiian band was advertised. 15 minutes before showtime, there was no band and we were the only ones there. All of the sudden a van pulled up, and the band rolled a platform out of the back of the van down a ramp, with all the gear mounted to the platform. In two minutes they were plugged in and ready to play. I think the steel was tuned to C6. I remember one song where the steel player, rather than ending on the tonic chord open position or 12th fret, ended with a chord at the seventh fret, playing G6 over the band's C6. It sounded great. To this day I haven't figured out which steeler it was."

When asked who his favorite steel guitar players are, he replied, "I like all the players before 1930, as well as Jules Ah See, Billy Hew Len, Rudy Wairata, Noel Boggs, Alvino Rey. And that's not even counting all the great living players!"

In addition to playing the electric 6-string and steel guitars, Chuck also plays an instrument called the Chapman Stick. He purchased the 82nd Chapman Stick in 1976 and holed up in a cabin to woodshed on it all day long for 6 months.

And, if any time remains, Chuck laments, "I am fortunate to live right on the beach now and will go there on nice days."

"Spotlight on Chuck Hughes, y'all
He plays guitar and steel, y'all
Not much he can't do, y'all
Oh yeah, oh yeah"

This video of one of Chuck's practice sessions was also included in the March, 2021 Hawaiian Steel Guitar Open Stage Showcase that was livestreamed on Facebook and YouTube.