Spotlight ON! Noriko and Shuji Tomita

This month we shine the Spotlight ON! Noriko and Shuji Tomita.

Noriko Tomita is a steel guitarist and a student of Ke Kula Mele Hawai‘i School of Hawaiian Music. She has appeared at numerous steel guitar festival open stages on Maui and in Waikīkī, and most recently on the Hawaiian Steel Guitar Open Stage Showcase. Her husband Shuji complements Noriko's steel guitar playing with his soothing vocals.

Noriko learned to play the piano when she was in Primary School.

Her musical experiences then expanded to the Koto, a zither with thirteen strings and the national instrument of Japan. She was given the Koto by her aunt after graduating from High School.

Noriko was very interested in playing it because of its beautiful sounds. The instrument is played using three picks in right hand fingers. The left hand fingers press the strings to change the intonation of the strings. (Note the playing technique similarity between the Koto and the steel guitar.)

Noriko listened to Hawaiian music of Makoto Shiraishi and Na Lei O Hawaiians and developed her familiarity with many Hawaiian songs and Hawaiian bands. She started to learn to play the ‘ukulele at the Society fourteen years ago. While at the Society she gradually became interested in playing the steel guitar. 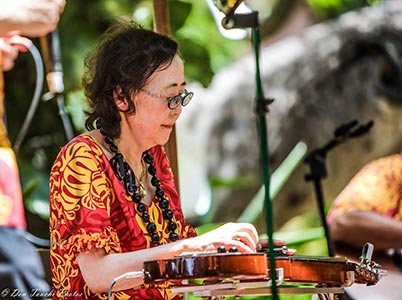 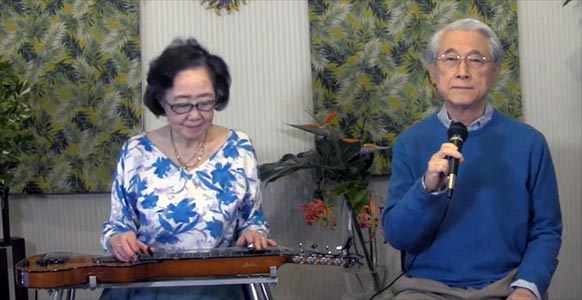 After learning of Shuji's interests, Alan Akaka invited him to accompany Noriko singing "Blue Lei" at the 2017 Maui Steel Guitar Festival. They have appeared together ever since.

Prior to the pandemic, the duo appeared at various Maui and Waikiki steel guitar festivals throughout the years, and also performed at the HSGA (Hawaiian Steel Guitar Association) Japan convention every year. They also played at the CoCo studio in Akasaka, Japan, Shibuya Buckie in Shibuya, and the Aloha Station in Roppongi. They hope to resume performing after COVID-19.

Shuji says, "We are grateful to Kumu Alan Akaka for providing nice Hawaiian music lessons with MP3 and music sheets."

This video is of a performance by Noriko and Shuji Tomita doing "Ho‘omalilmali" on the Open Stage of the 2019 Waikīkī Steel Guitar Week.