This month we shine the Spotlight ON! Aaron Benolkin.

"I've been enamored with music as far back as I can remember," says Aaron.

Aaron Benolkin was born in Austin, MN, the home of Hormel's SPAM. He moved to Anchorage, AK, at the age of 12 and has been there ever since.

Regarding his childhood, Aaron says, "My dad had an incredible album collection (and associated Hi-Fi system), and my grandfather was an organist. [While] spending summers on my grandparents' houseboat on the Mississippi River, my grandpa would entertain with his friend Bobby, who played saxophone."

At age 8 Aaron began harassing his parents to get him a saxophone. His mom took him to a local music teacher to see if his hands were even big enough to play the sax. Luckily, they were and he became the owner of a 1965 Buescher alto sax. Thus began his journey as a musician. 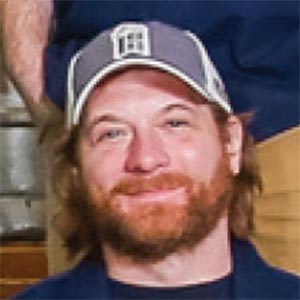 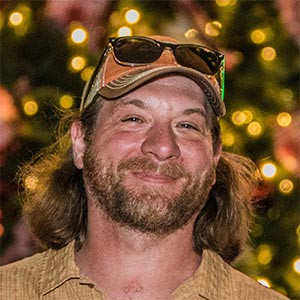 Music has continued throughout his life. He was a regular gigging musician for 20 years and worked as a professional brewer for Broken Tooth Brewing. In 2020 he switched careers and moved to remote working doing bookkeeping and payroll work.

Aaron says he is now "Working for myself remotely and loving the freedom of it all."

"[I] never thought I'd see myself in this line of work, but after handling my band's books/finances and having an accountant point out I had a knack for it, 2020 provided the opportunity to make a change."

Aaron's venture into Hawaiian music began with a Hawaiian vacation.

"My wife Libby and I took our first trip to Kaua‘i in 2000 and stayed in a cabin up at Kahili Mountain Park. At night we'd leave the radio on KKCR and listen to their overnight Hawaiian music as we slept and that's when my love of Hawaiian music was first sparked," recalls Aaron.

"On our next trip to Kaua‘i, years later, we were lucky enough to catch Wally and Polei Palmeira performing at the Hukilau Lanai with Ed Punua on steel guitar and that's when Hawaiian steel guitar became a fascination."

Aaron continues, "A few years later I met Jess Montgomery after watching him perform with Dennis Chun and the next day he brought a couple [of] lap steels down, met me on the beach where we were staying and gave me my first introduction to C6 tuning (though sooo much of it was lost on me at the time).

"The next year we coincidentally were visiting at the same time as the first annual Kaua‘i Steel Guitar Festival and that's when I first met Alan Akaka (and so many others)."

Soon thereafter, Aaron began his steel guitar studies with Alan Akaka. This is Aaron's sixth year as a student of the Ke Kula Mele Hawai‘i School of Hawaiian Music.

Says his Kumu (teacher) Alan Akaka about Aaron's playing, "Aaron is a natural on the steel guitar with a good feeling for the instrument and really makes it sing. And it's not only for Hawaiian music. On a recording he did recently with his band his fills added a soulful touch to the overall musical experience."

Aaron credits his parents for their support of every music endeavor he has taken on. "They even showed up at a Kaua‘i Steel Guitar Festival a few years back with an early 60's Framus Waikiki lap steel my mom came across, to gift to me," recalls Aaron.

His music career has given him many rich and memorable experiences. "I've been fortunate to have performed all over Alaska, along with multiple tours and musical trips in the Lower 48." He continues, "Notable gigs include performing at South By Southwest, the NPR Mountain Stage radio program and a chance to sit in on pedal steel guitar with Jason Isbell and the 400 Unit. I've also been lucky to have performed on the Open Stage program of the Kaua‘i Steel Guitar Festival a few times." 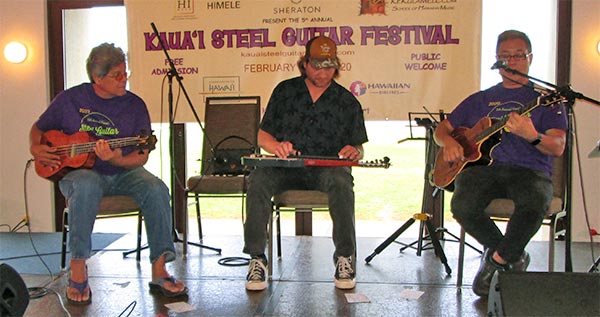 Aaron has also been involved with multiple albums through a few groups he's played with over the last 15 years (The Whipsaws, Nellie Clay and the Lucky Dogs, Jack River Kings, Hope Social Club), along with session work with various artists. He is currently a member of Hope Social Club, an Anchorage-based band, and continues with occasional session work and sit-in gigs.

This video is of a performance by Aaron doing "Hula Lolo" on the Open Stage of the 2019 Kaua‘i Steel Guitar Festival.