This month we shine the Spotlight ON! Peter Garellick.

Peter Garellick is a multi talented singer and musician who splits his time between California and Hawai‘i and is actively involved in the music scene in both locales.

Peter was born and raised in Los Angeles, California and currently resides in Berkeley, California. He was involved with public education for thirty years and is a recently retired public high school history teacher.

"I started playing stand-up bass in 3rd grade, then switched to cello," says Peter. "Wish I had kept that up!" he laments.

Peter worked at Down Home Music, a record store in Richmond, California, that specializes in roots music such as folk, gospel and zydeco. While working there, he was exposed to reissues of early Hawaiian 78s.

"I was just mesmerized by the steel playing," says Peter. This inspired him to take up the steel guitar. 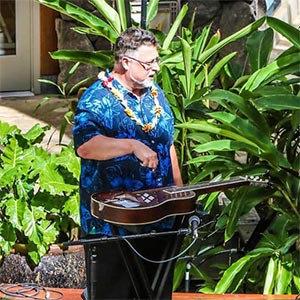 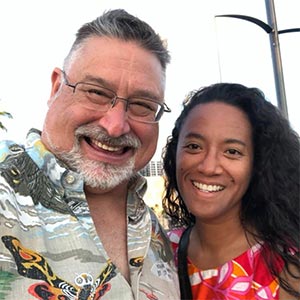 Regarding his steel guitar preference, he remarks, "I mostly play acoustic resonator guitars–tricones, dobros, etc.," I have dabbled a little with electric steel guitar but it doesn't suit me the way resonators do."

"What I love about non-pedal steel guitar (resonator and electric) is how expressive it is, and how every player has their own unique sound," says Peter. His favorite steel guitar players and influences are Sol Ho‘opi‘i, Benny Nawahi, Dick McIntire, and Rudy Wairata.

Peter has performed in a variety of venues in California, Hawai‘i, and Indonesia. His wife, Vanessa Alputila, is Indonesian. When in California, he performs Country music with Crying Time, a group that is described as Honkytonk revisionists out of Oakland that plays straight-up country and western music, from Bob Wills to Glen Campbell with whistle stops in between.

His California appearances also include performances of Indonesian music with the Javanese Gamelan Ensemble Sari Raras, and with his Hawaiian group Haopinaka, which describes itself as bringing "the spirit of aloha to the San Francisco Bay Area with Hawaiian guitars, ukuleles, and sweet vocal harmonies." The group's name Haopinaka is derived from the origins of the group's members. Peter is Caucasian (HAOle), Sil Castillo is Filipino (PInoy), and Rod Valdez is Hawaiian (KaNAKA).

In Hawai‘i, Peter sometimes performs with The Barefoot Boys. Peter and Vanessa are currently in Hawai‘i for an extended stay and are performing regularly at the Barefoot Beach Cafe with Vanessa on vocals and Peter on the acoustic steel guitar. 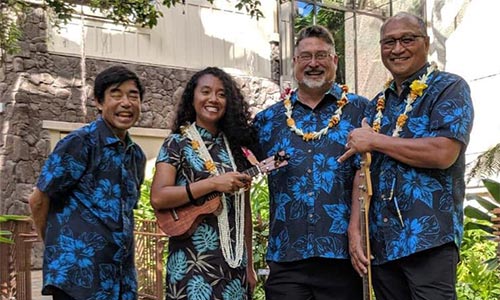 Peter also plays the electric bass and ‘ukulele. His California group Crying Time has released several LPs and CDs, and Peter appears in various YouTube videos by the groups he performs with.

When not playing music, Peter spends his time with photography, travel, and listening to music. He hosts a Facebook Page called Peter The Relic Photos.

"I create images which combine vintage or historical photographs with photos that I take in the same location. I am exploring the juxtaposition of 'then and now' or 'rephotos' in new ways."

On the left you can see the New Western Hotel, which was built 5 years earlier in 1885 on Sutter Street in downtown Folsom. The sign with the hotel's and Zimmerman's name can be sign on the left edge of the photo. PC-Peter The Relic Photos

Peter concludes, "I am always striving to express myself better on steel, and it seems like a never-ending process." He continues, "[But] not in a bad way! There is just always something new to learn, a different way to play something. There are days I feel so incompetent on steel, and the very next day it's like 'Hey I sound pretty good!'"

"Anyways, it's really a wonderful journey."

This video is of a performance by Haopinaka doing "Ke Aloha". Vanessa Alputila is the featured vocalist with Peter Garellick on the tricone.