This month we shine the Spotlight ON! Christo Ruppenthal.

Christo Ruppenthal is a familiar name in the steel guitar community. He currently heads up the Hawaiian Steel Guitar Association as its president. The membership-based organization has hundreds of members worldwide, including active members in Hawai‘i, Canada, mainland USA, England, Scotland, Northern Ireland, Wales, Holland, Finland, Sweden, France, Germany, Italy, and all the way across oceans to South Africa and the Pacific Rim countries of New Zealand, Australia, Indonesia, Malaysia and Japan.

Christo currently resides in Madison, Wisconsin, and grew up in various areas of Southern Wisconsin.

"We had a baritone ‘uke in the house when I was a child," laments Christo. "I also remember making a pots and pans drum set, much to the dismay of my parents! I did well on trumpet and French horn in middle school band. Although I did have lessons in my early high school days I really moved to guitar seriously around age 18. I made the conscious decision to become a professional jazz musician at age 20." 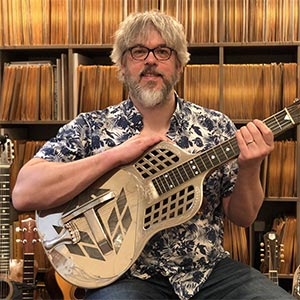 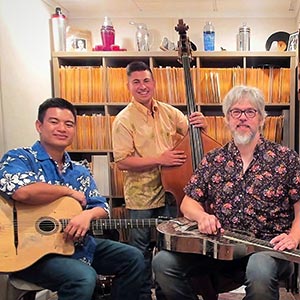 Christo describes how he developed his interest in the Hawaiian steel guitar.

"I first fell in love with Sol Ho‘opi‘i's music around 2007. A friend let me a CD. I couldn't get enough of it! My entrance to the Steel Guitar world as a musician was through the Western swing music of Bob Wills, and Jerry Byrd and Don Helms' work with Hank Williams. I was already playing guitar in the western swing band and through necessity I started to learn Steel due to some membership changes around 10 years ago. From there I very quickly drifted earlier within the music history to its Hawaiian roots and acoustic guitar.

"My sweet spot is the time of the second generation of Hawaiian steel guitar players on the mainland, where traditional Hawaiian music started to be infused with vaudeville and jazz but primarily prior to the invention of the Electric guitar, 1925-1935. So [I'm referring to] Sol Ho‘opi‘i, Sam Ku West, King Bennie Nawahi and others of that era.

"That being said, I am an avid 78 RPM record collector. I have a passion for early Hawaiian steel guitar 78. My library currently stands around 1000 Hawaiian disks focused on pre-war music prior to the invention of the electric guitar. I have shared my collection through my "Antique Aloha: Hawaiian Music of the Golden Age" phonograph presentations locally, at HSGA Festivals, and online. I also collect world and other ethnic music from around the world on 78 RPM."

"My primary performance instrument is a 1928 Style 3 "Lilly of the Valley" National Tricone. For many years I performed on an original Weissenborn Kona. I let that go once I got my Tricone. But I intend to get another Weissenborn soon. I also have an 8 string custom made Todd Clinesmith fry pan on the way. I would LOVE to some day own an original pre-war long scale Rickenbacher A-25. Anyone selling?"

A professional musician by trade. Christo also plays the ‘ukulele and jazz guitar in the Django Reinhardt style.

"Prior to the pandemic I was a full-time professional musician since 2010. In a typical year I perform between 160 and 190 gigs. Most years I had three bands running simultaneously which I was leader of. I played jazz in the Django style, Western swing, and a fusion of Hawaiian music and French popular music."

In addition to his performances, Christo is also a rare 78 RPM record dealer. He's also had other side hustles including running a clothing line / screen printing shop, and teaching entertainment and media business classes at the college level.

Now that gathering restrictions are loosening up, Christo is once again gigging.

Describing his performance experiences, Christo says, "I have performed all throughout the Midwest of the United States, I've also done gigs further away within the US periodically. My band Caravan went as far as Bangalore India for a run of jazz club dates in 2016." He continues, "My performance opportunities are continuing to come back. Coming out of a pandemic I am much more focused on performances which I feel are fulfilling and enjoyable to do. So I'm more focused on concert series, jazz club, performing arts Center, and festival stuff. So a little less of the bar gigs I used to do those days."

Christo talks about his forthcoming recording project. "I'm currently working on the 12th release from my label Hot String Swing Records. The majority of these releases are in the Django Reinhardt style.

"More recently I have released some Hawaiian steel guitar material. I'm currently working on "Antique Aloha 2" the second in an ongoing series of recordings inspired by some of my favorite Hawaiian 78 RPM records from the Golden Age of Hawaiian Music. I play all the instruments including steel guitar, ‘ukulele, guitar, and baritone guitar.

"The recording project that will take place next is a full length recording of my new group Christo's Novelty Combo. We present is a unique mixture of the Vaudeville era, novelty infused hot steel guitar and ‘ukulele of the 1920s and 30s "Hawaiian Craze" and the swinging sounds of French jazz from the 1930s and 40s. Think Hot Hawaiian guitar meets Jazz à la Django!

"I have also been a guest artist in other bands recording projects. And groups of mine have been featured on other labels compilation releases."

"I am also currently serving as president of the HSGA - Hawaiian Steel Guitar Association, a worldwide 501(c)(3) nonprofit organization promoting traditional Hawaiian music and the signature sound of Hawaiian steel guitar. I would invite anybody reading this to please consider joining the HSGA!"

This video is of Christo's Novelty Combo doing "Honolulu Sweetheart Of Mine".